LEST YOU ASSUME this book is for and about old people only, don’t – it is relevant to us all. Not everyone lives to old age and most of those who do seem resigned to the inevitable decline and age-related infirmities.

The central premise of the book is that we need to embrace the opportunities that longevity offers us and harness its potential, rather than default to resignation. The author offers a science-based and accessible guide to achieving this.

‘A goal for healthy living is acceptance of life events and the appreciation of each new day.’

Friedland uses real case studies to emphasise a quote by fellow physician, the celebrated cardiologist and veganism proselytiser Dr Caldwell Esselstyn – ‘Genetics load the gun, lifestyle pulls the trigger’ – underscoring the critical importance of choices made for us in childhood and the choices we make ourselves throughout adulthood.

Friedland is a neurologist, so the brain and its complexity, as well as its supremacy over, and interaction with all our organs, are central to the theory that we need to build four reserves before we reach the age of gradual depletion. These reserves are: cognitive, physical, psychological, social.

‘It is a central focus of this book that we can enhance our reserve factors through our lifestyle choices.’

The book explains in lay language the function of all our organs and their interdependence, as well as the role that our microbiota (the microbes that live in our gut and all body cavities) plays in preventing disease.

It posits that treating the causes, rather than the disease, and taking a holistic approach to each individual, is critical.  It warns against the wide-spread practice of over-prescribing medication.

The chapters dedicated to nutrition and physical exercise will not be a massive revelation to the already health-conscious.

The strong caution against eating meat is reiterated throughout the book, although the author stops short of advocating a rigid vegan diet. Interestingly, eating fish, in particular farmed fish, is strongly discouraged because of the practice of feeding it rendered bovine product (basically, cow carcass engineered as feed).

Very modest amounts of wine/beer are fine, the author says, which would come as a relief to social drinkers and wine lovers. The Mediterranean diet is endorsed, as it usually is by most nutritionists. The importance of gut microbes for our brain and heart health is underscored time and again, with an emphasis on fibre, prebiotics and probiotics, as is the importance of building natural immunity through exposure to germs from a very young age.

Quite the opposite, in fact, you can take up exercise (being mindful of your body’s limitations, obviously) at any age and reap the benefits of increased muscle mass, improved cardiovascular system, lungs and ultimately brain.

Any exercise is better than none and no excuse for skipping it is valid. Some chapter space is dedicated to TV watching, which the author cites as one of the major contributors to age-related cognitive decline:

We were not built to be sedentary and we are not built to live into our 90s, so boosting up our four reserves from a young age, all the way through to and in retirement, is crucially important if we want to remain physically fit and mentally alert to enjoy our later decades.

Staying positive and keeping an upbeat attitude are absolutely critical to aging well.  Giving in or giving up are often the reasons why people descend into a rapid decline. Not having the psychological reserves or the mental resilience to combat life’s setbacks can cut your life short dramatically. Our ancestors had a survival instinct that is stunted in us, 21st century humans. We need to rediscover and cultivate it or perish.

Social interaction and taking on new intellectually stimulating activities or making new friends in order to alleviate loneliness and avoid developing a sense of being irrelevant are equally critical.

We actually know these things but as life itself becomes more computer-centric and humans more isolated, relearning social engagement requires an effort. Retaining a degree of intellectual curiosity and engaging with life outside of our capsule keeps the brain alert and gives us a reason to live and live meaningfully:

‘We all need to enhance these factors to decrease the influence of aging processes on our function. Of course, we also wish to reduce the development of age- related changes and reduce the risk of age-related brain disease.’

Well worth the read and recalibrating lifestyle from an early age. 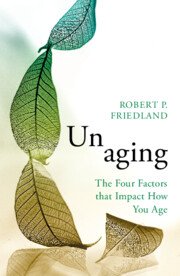