St Barths: the summer home of the rich and famous. Extravagantly wealthy; gloriously alive; effortlessly chic. The diamond in the Caribbean corona. Saint Barthélemy is a globally famous luxury destination and trying to write something new about it will simply result in rehashing the same old words. Rather than describe the island as if the reader has never been (as I have been doing so far), instead I will make a few comments.

Firstly as to why it is the ultimate destination in the Caribbean, and, for some, the world.

St Barths is a tiny island with no natural resources of its own. Its largest harbour in the main (small) town of Gustavia is relatively shallow and can only admit small yachts. Roman Abramovich, hosting a party a few years ago, flew all of his guests in from St Marten by helicopter. Gustavia itself has a convivial atmosphere, but that is not unique for the Caribbean.

The island itself has no obvious advantages over any other – indeed, compared to most it is at a disadvantage – except for one particular characteristic, that one special quality that has given it an Elysian status over all the rest of the West Indies.

St Barthélemy is an expression of beauty in the form of 8.1 square miles of rock, sand and sun. Somehow, by some improbable chance, St Barths is the perfect St Barths – that is to say, it is the most perfect incarnation of itself that could exist. Not only are words inadequate, any attempt to use them would destroy one’s appreciation of a beauty that should be intuitively recognised. Either one sees it or one doesn’t – the sea surrounding the island is the best shade of blue; the natural shapes and rock formations of the island are exactly right and the trees and vegetation grow in a way that is always picturesque. Even the weather is that desired combination of a hot sun and a chill wind (although, for the one whole day I was on the island, the sky was overcast and liable to pour rain down in an absolute downturn of fortune for me).

Much as the compression of tons of carbon will produce a small but flawless diamond, somehow this tiny island possesses within it all the beauty of nature that it could possibly contain. It is small wonder that the government has a strict building policy that effectively prohibits new construction, and that there are three natural reserves in an area smaller than many towns. Nor is it surprising that the island is a French territory – demonstrating once again that impeccable Gallic sense of style.

My second, and final, comment is on the atmosphere of the island. From September onwards all the hotels shut in preparation for the Christmas party. That is not to say that St Barth’s is dead, or even muted, at this time of year – merely that one gets to see an aspect which is normally missed by those too star-struck to notice. Life on St Barth’s – especially at Gustavia but true of the entire island – has a very strong communal sense to it, and one that is involving and eclectic. Inhabitants and tourists, the wealthy and the less-so, even the French and other nationals, can be found partying and dining in Gustavia on a Friday night, in a way that the cosmopolitan cities wish they had but rarely do. From around 5 or 6 pm, at Select, a particularly popular exhardware store turned bar in Gustavia, one can witness millionaires and billionaires chatting amiably with local fishermen over a couple of planteurs.

The highlight of the one evening I have on the island is a reggae concert, part of an ongoing music festival, which draws almost the entire night time population of Gustavia into a small area to dance and sway without a care in the world. On St Barths there are no paparazzi, no red carpets, none of the antics and trappings of Hollywood or any other celebrity display case – just an opportunity for pure, simple fun. 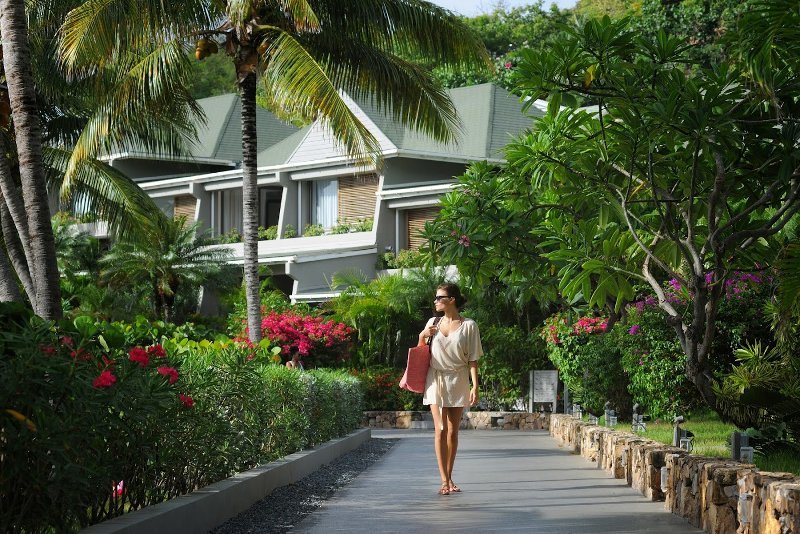 Hotel Christopher is a new development for the island, an ongoing project that is the opus of the Langlades, a couple whose experience as hoteliers spans the Caribbeans (including a stint at Sandy Lane) and South America. As has happened to this writer over the space of a sunny afternoon, Sandrine and Christian fell in love with St Barthélemy and seized upon a renovation opportunity presented to them. The pre-existing building, an Italian squat which was by all accounts a veritable eyesore (the one place on St Barths that did employ a red carpet in its driveway), had fallen into disrepair.

Whatever nightmare the former establishment was, they have restored Hotel Christopher to the happy realms of light. With an open purview, what they have crafted is a new kind of hospitality, a foray into the future of luxury hotels. The Langlades will doubtless be unnerved by my use of ‘luxury’ – ‘we are tired of writers using these generic words and phrases to describe the hotel’, Christian tells me during our first meeting. B Beyond is all about the search for that which is ‘beyond luxury’ – a quality that is not about ostentation, extravagance or even the wealthy lifestyle but about having, in the immediate moment, the highest form of experience humanly possible. In this sense the Hotel Christopher offers the very best of St Barth’s.

Nothing at Hotel Christopher is simply there to say ‘look at me, this is luxury’ – rather, everything has a purpose in creating that B Beyond experience. Just the rooms themselves, in their minimalist style and contrast of black and white, exude from every line and feature an aesthetic power above the functional and the surface décor.

Both the interiors and exteriors are ingeniously designed to reflect on the sense of flow present in St Barths landscapes and seascapes. In effect, one is conveyed towards the hotel’s spectacular waterfront with its view of this perfect island’s coastline. It is here that one can enjoin in the synergistic physical experience, whether that is a massage by the swelling curves of the infinity pool or a delectable meal at the Mango Bar. There, I would recommend the Mango Lobster wrap, a surprisingly bittersweet interplay for the true sophisticate, and a glass of the smooth, amber tinted Rosé wine (unrivalled in this writer’s opinion).

My encore in Saint-Martin was rather more muted than my last appearance, due to the near-encounter with Hurricane Irene which brought heavy rains and violent winds, and put the island on red alert for the duration of my stay. You will doubtless be highly grateful that this writer escaped a more serious threat to either his life or his travelogue. In truth, the most threatening thing about a red alert (as long as the tropical storm doesn’t make landfall) is the chance of monotony, due to the curfew on leaving any building while the sky and sea rage.

Thus, my only glimpse of Baie Longue, an area razed by a previous hurricane but now in the process of being redeveloped as a spot for the fabulously wealthy, was during the drive to my hotel. Fortunately for me, this storm was an opportunity to relax and fully enjoy staying at one of the best hotels on the island, and the only place where riding out the storm is just another day of luxury. As a final note on the island generally, Saint- Martin (both the French and Dutch sides) is renowned in the Caribbean as a place to party, in the very modern sense of that word. With nightclubs and restaurants galore, whatever kind of drink you want from wherever in the world, Saint-Martin is all about the hanging out with other people who know how to have a good time.

La Samanna is an expansive resort with extensive grounds – the tall hotel building itself and a set of equally impressive rental villas. The hotel, whose aim seems to be nothing less than the total fulfillment of their guests’ wants and satisfactions, hosted me in their premier Happy Baie Suite.

La Samanna have taken the view that guests want, above all, to have the comforts of home, and from that basis have created the most opulent, most spacious of rooms. Just the Happy Baie Suite is as large as many central London apartments, and could easily function as one too – with its own kitchenette, semi-partitioned dining and lounging areas, a bathroom and dressing room complex, even a long hallway just for that authentic touch. Of course, it is a rare London apartment that would have the marble surfaces and floorings, the sprawling king-sized bed, outdoor Jacuzzi and porch, and regal furniture positioned in every corner and along every wall space. It is the kind of luxury where sitting (or lying down, or reclining) and absorbing one’s surroundings is enough to appreciate the great vision going on at La Samanna.

The Happy Baie suite is on the first floor, just one of a number of specialty suites, in a huge building of 83 guestrooms. To say that La Samanna is far larger than you will probably ever explore is an understatement. Sadly, the most I got to see was the ground floor of La Samanna, housing the bar and restaurant. The Baie Longue Bar is an arresting watering hole with a strong Moroccan and North African style, a drinking den that already has an atmosphere of its own even without any guests in it. 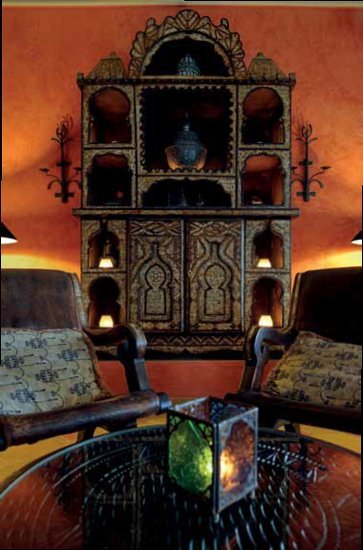 The main restaurant overlooks the sea and beach with every manner of nautical sports on offer and that I would have liked to sample, were it not for the strong winds and somewhat unusually powerful waves crashing into the sand. Breakfast is an American-style buffet, with my favourite twist of all – for the one morning I was here, the bacon was replaced (whether temporarily or otherwise) with grilled Mahi-Mahi. Dinner is a lovely affair, the candle bravely shining out onto the dark sky before you, and an excellent French-inspired cuisine. While there you must take the opportunity of visiting the wine cellar – with 12,000 bottles and over 1,250 labels, it is simply mind-boggling and fit for the true connoisseur.

I also had a tour of one of the new rental villas, the rising stars of the La Samanna estate. They all have a similar floorplan of 4,600 square feet which makes them larger than some hotels. Everything in the Happy Baie suite is represented in the villas but on a much larger scale. A huge kitchen, enough to cook for the couple of hundred people that have been fitted in one of these villas (an evening the manager describes as the busiest they have experienced so far)…Whether you want to cook for yourself (a surprisingly common choice) or have your own private dinner service, these kitchens have every kind of appliance and tool that you could need to create a unique, personalised dining experience.

En-suite bedrooms on every floor with cavernous built-in wardrobes (which are apparently never enough, as the occasional La Samanna guest has been known to bring up to 37 suitcases); a wide view overlooking the coastline of Saint-Martin, where one can sometimes see the curvature of the earth on the horizon; a private pool that skirts around one side of the villa like a small crystal sea, all of one’s own… These are just a few of the features in the villas that offer an experience beyond a typical notion of luxury. Come to La Samanna, the most fabulous of hotels on the island of Saint-Martin, to do and to have almost anything you desire.