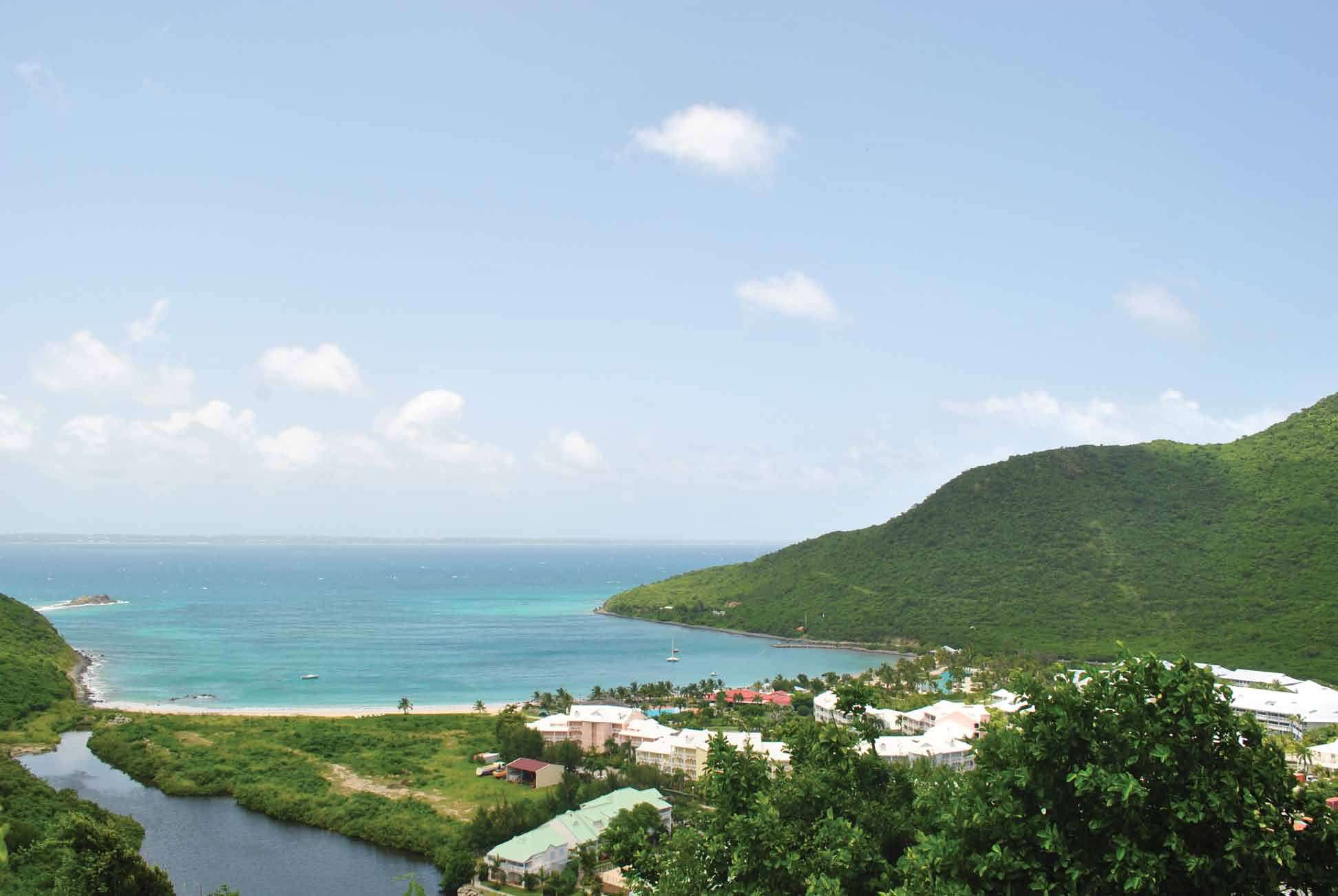 Upon arrival at Princess Juliana Airport I head straight for Anse Marcel, located in the northern French side and almost opposite to the airport on the southern coast of the island. The name, Anse Marcel, is a mystery that plays softly on the tip of your tongue. My taxi driver, a Dutch resident who swore by the apparently all-encompassing Simpson Bay, asked me why I was going ‘into the bush’ – to hide perhaps?

The first step in unveiling the riddle of Anse Marcel is the discovery that you access it not from the lonely, winding road but from the marina complex; a cove within a cove for private yachts and cruisers that have made this their hub. Around this focal point is convocation of luxury hotels and villas, all built within the enfolding wings of the bay. With such a layout, the encircling band of natural walls and an absolute distancing from the island, Anse Marcel has developed something that normally can only be found on a few private islands – a total commitment to modern luxury without the intrusions of Modernity.

Whereas the people of Puerto Plata are disconnected in time and space from the world out of blissful ignorance, the visitors and inhabitants of Anse Marcel are disconnected because they know precisely who they are, where they are and how they can use that to their advantage.

Walking through the ‘streets’ – or rather, the roads used to navigate between residences and the walkways within the hotels’ grounds – can only be described as an ethereal experience. Despite the multitude of cars, it is rare to hear the hum of an engine. Although there are many activities going on in the immediate vicinity of Anse Marcel, within the bay there is tranquillity in the pace of life – stroll down to the beach bar for a Mojito, have a quick dip, enjoy the full view of the natural harbour before you, and afterwards amble back to your hotel room for further refreshment.

I dined at the Calypso, a bar-restaurant tucked away in the corner of the shopping block. Even though the food is simple in its design, the quality is superb. The pizzas especially would be the envy of any Italian pizzeria, not least for their wafer-thin crusts; the house variety, made with smoked duck and honey, is a perfect balance of flavours and textures and thoroughly recommended.

Anse Marcel, nestled within a cool bay with a smooth beach, is truly a Caribbean haven. 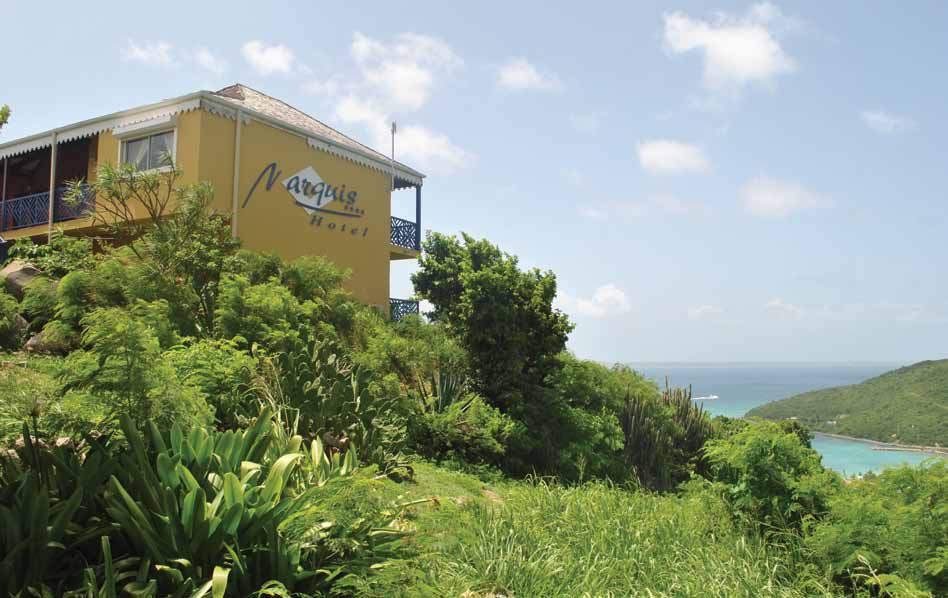 The Hotel Marquis is enthroned on one of the terraced slopes of Anse Marcel, overlooking the bay below as an Olympian pondering from the mount. It is named for the owner, the Marquis de Gaillon, who fell in love with the Caribbean and decided to stay. He too realised the hidden qualities of Anse Marcel, and has brought them out in the form of a charming property with one of the best views you can have. Every aspect of the hotel, run in a very hands-off manner, is designed for your own personal pleasure.

The rooms are decorated in an intriguing fusion of rustic France, traditional Caribbean and modern luxury, with some cool art by native artist Francis Eck to complete this tasteful layout – each room, of course, has its individual colours and motifs. Despite the finery, or rather because of the way it is arranged, the room feels homely – as if one were a guest rather than a ‘guest’ – an attitude fostered no doubt by the friendly but unobtrusive style of hosting. The full continental breakfast, customisable with a variety of options from an additional breakfast menu, is served to your private veranda overlooking the sea.

It is the same situation with lunch, although there is the option of drinks at the poolside bar too. Here, one can either enjoy the cool breeze under the shade or bathe in the sunlit waters of the small pool, more an aquatic relaxation than exercise. In fact, after a few heady cocktails it is the perfect place to philosophise about Anse Marcel or resolve one’s existential questions. For getting around (and for dinner) one has the near-private use of the hotel shuttle; however, the only time you’ll want to leave this pampering is for the evening meal at the Calypso. Whether it is lazing at the pool, a friendly game of tennis at the hotel courts or simply enjoying where one is with a good meal and fine drinks, Hotel Marquis is a state of mind as much as it is a place. 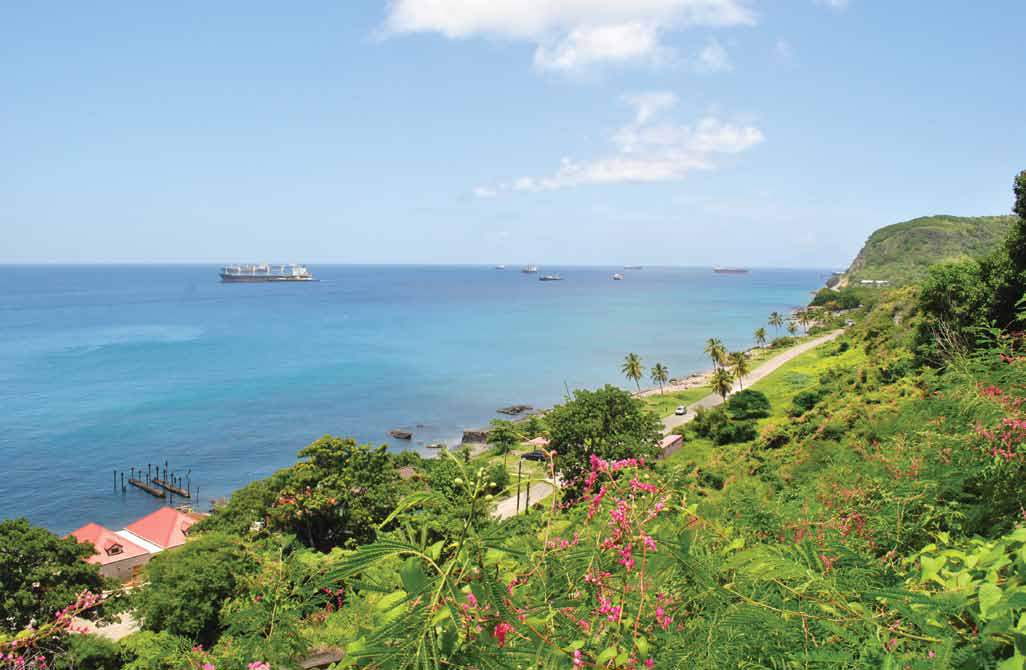 St Eustatius, a small volcanic island just to the south of Saint-Martin, was once the economic centre of the Caribbean for almost a century. By the early nineteenth century, however, the ‘Golden Rock’ had fallen into poverty – and perhaps even worse, obscurity – which lasted up to the present day. While the turn of the new millennium may have been little more than an excuse to party for most of the world, this symbol of change has bought the tides of fortune back to Statia’s (admittedly rocky) shores.

The island’s fascinating history has shaped it into a truly unique place to visit, and its primary attraction is its cultural heritage. This currently lies in the hands of the island’s sole archaeological presence, SECAR, a private company which has made extraordinary efforts of time, money and labour.

Oranjestaad’s centre has a charming Dutch atmosphere, and it is a delight to wander around simply to admire the historical architecture. Take the Slave Trail, a stone walkway that zig-zags along the stone perch of Oranjestaad, downwards and you will be rewarded with an amazing view of the eastern bay of St Eustatius. In the lazy afternoons, just before sunset, Statia’s occidental landscape is suffused with a yellow tint and its sea transformed into an argent scale.

The bottom tier of Oranjestaad is the former docks and warehouse district. In a similar vein to Heston’s dreadful discovery of the Statue of Liberty, these beaches offer the surreal sight of lampposts rising out of the water. Adventurous visitors would be well advised to contact the island archaeologist at this point. The current holder of that post possesses an intimate knowledge of where to find the island’s sites – many of which are overgrown and/ or difficult to access. For everyone else, the old commercial district of Oranjestaad is still much more than a semiaquatic sepulchre of antiquity. The small black-sand beaches are as yet only frequented by a few families and tourists. Even then, the visitors tend to stay in the south-westerly beaches, those closest to the shops and restaurants.

Just a minute’s stroll down the beach is the Old Gin House, Statia’s upmarket hotel with a waterfront bar-restaurant. This serves as the midday watering hole of the island’s Dutch residents and tourists, simply for the location and jovial atmosphere. It is no secret in these parts that the best Piña Colada in the Caribbeans is served at the Old Gin House bar.

Unfortunately, while the drinks on Statia flow like the rivers of Babylon, dining options are more limited. For any extended stay on Statia, BB recommends either adjusting one’s stomach to less refined nourishment or acquiring a personal chef. St Eustatius is, generally speaking, an island from which high culture and the high life disappeared long ago. This in itself presents many new opportunities – not least of which the possibility for newcomers to make their own mark. On the north-eastern coast of Statia lies Corre Corre Bay, an inlet ringed by coral reefs. On a calm day, Corre Corre offers the best snorkelling on the island – schools of sky blue fish, Eagle Rays (a rare, spotted sting ray); giant lobsters abound in a teeming seascape.

As if that was not enough, there is always the Quill, the volcano which dominates the landscape of St Eustatius by its centrality and height in an otherwise gentle geography. Reaching the rim is a tough upwards trek – but it is the descent inside the volcano that is the most difficult part of the travail. The ‘path’ downwards is often no more than an attempt to take advantage of the natural breaks in the drop downwards. A strong rope here acts both as a guide and a lifeline. Those brave enough to take the trip downwards will be rewarded with a fascinating walk within the crater. My mind jumped to Jules Verne as I observed an ecology totally isolated from the island proper. Giant boulders are strewn like a child’s forgotten marbles all around and in between the massive trees which reach above the forest canopy.

Out of this near-dead volcano a forest is shooting up, and atop the ruins of an abandoned city the population swells. For an island that is used to trading on past glories in colonial times, this humbler rise of Statia in contemporary times promises an exciting future holiday destination.